People often want to run a piece of code whenever a certain condition is met. The most intuitive method of doing this is using some kind of scheduler, which constantly checks whether the condition is met, and then decides whether the script should run or not. The example below will run the runScript() method

However, this code needs to run constantly throughout the day, to check whether it should run runScript(). This is mildly annoying if it’s running on your local machine, since you need your computer to be on, and running the process at 7am. When you move this to the cloud, it becomes even more impractical, since you’re paying per minute of server time. This is especially annoying because most of this server-time is spent checking the time, instead of actually running the script. For a script that runs for a minute every day, you’d be overpaying for your server by a factor of 60 * 24 = 1440.

Note that this concept applies to any script that only runs when a condition is met - you’re not just paying for script run-time, but also to constantly check whether the condition is met.

AWS Lambda lets you run scripts using their “serverless” model, in which you supply the code, and they’ll run it by provisioning whatever server you want, until the script execution is finished. You only pay while your script is running. This only leaves a single challenge - how do you ensure that this script only runs when its condition is met? The solution depends on your implementation, and I’ll discuss two scenarios, in which the Lambda script is triggered at either a certain time, or using a webhook.

We’ll try to create a lambda function that says “Hello world”, and run it at midday every day.

I’ll choose to create a new lambda, and choose to run it in Python 3.8 (arbitrarily, because I’m just as bad at all programming languages). 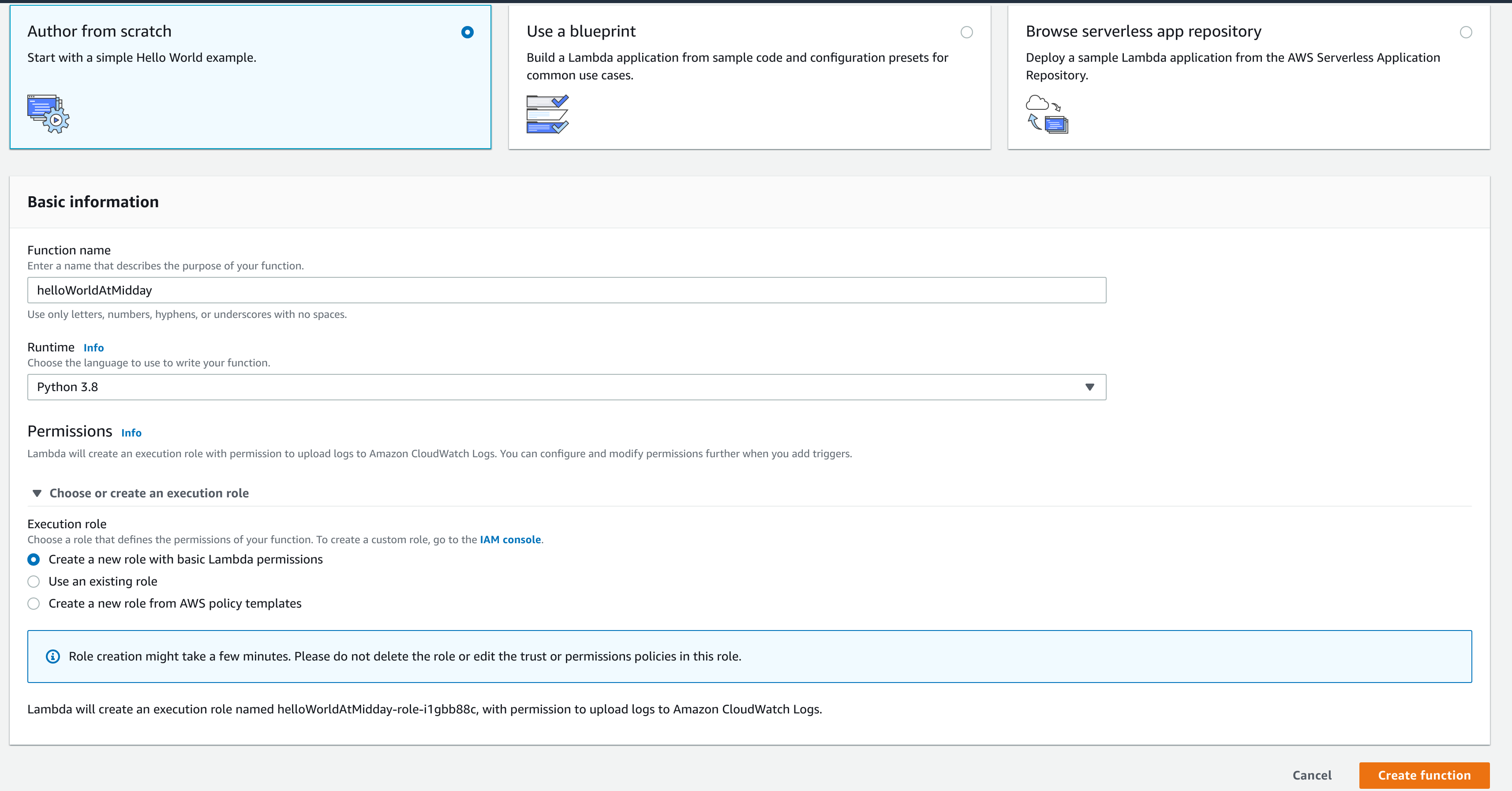 This takes me to an in-browser editor, with the following code:

When the lambda function is triggered, it will run the lambda_handler() event. For our purposes, I’ll change it to

When this runs, I expect my Lambda function’s log to contain “Hello world”. To test this expectation, I pressed the “Test” button, which creates a new test event, simulating a JSON payload that gets passed into my function, under context. I’m not using any external variables in my script, so I accept the default values, and create the test event.

After saving, running this test event shows the JSON response, which shows that my run_script() function ran. You’re now free to edit this, to do whatever you need it to do.

Triggering the lambda function at midday

To avoid paying for a server to see if the time condition is met, we want to outsource this to a managed service - AWS CloudWatch. CloudWatch is usually used because it offers insights on resource usage, but we’ll use it because it also lets you send notifications (using AWS SNS) at customisable intervals, which is exactly what we need. We’ll create a Lambda-invoking notification in AWS SNS, and then a CloudWatch rule that sends this SNS notification.

First, we go to the SNS Topics dashboard, and create a new Topic (notification type). The topic is really simple and doesn’t need anything other than a name (I’ve chosen InvokeLambdaMidday).

Next, I head over to the CloudWatch rules dashboard, and create a new rule. I’ll select a scheduled rule for 12am every day. This is done using a cron expression, which follows the minute hour day-of-month month day-of-week year format. For example, 0 12 * * ? * means “Run at 12:00 every day”. Go to the AWS docs to learn more.

This essentially says that the helloWorldAtMidday function may be invoked by SNS, if the SNS topic in question is called InvokeMiddayLambda.

Finally, to test this SNS-to-Lambda link, I’ll publish a message in the SNS topic manually. I’ll select the correct SNS topic, select publish message, and just chuck asdf into the message body, because it won’t let me keep it blank. After publishing the message, I’ll head back over to the Lambda, and under the Monitoring tab, I can see that its most recent invocation was at the current time.

Triggering a Lambda function from within your code is very simple. AWS provide software development kits (SDKs) that allow you to manage AWS resources within your own codebase. For Python, the SDK is called boto3, and its Lambda component can be imported using

This client represents the internet-facing Lambda API, which you can send requests to using this documentation. In our case, we want to invoke the Lambda function, so we would want something like this:

It wouldn’t be very secure if anybody can invoke your Lambda functions in AWS, so you’ll need to “authenticate” your server with AWS. This can be done by passing in AWS credentials into the server with the AWS_ACCESS_KEY_ID and AWS_SECRET_ACCESS_KEY environment variables, which will be automatically picked up by boto3.

It’s best practice to create a separate AWS IAM (identity and access management) user for your server, with minimal permissions assigned to it (including permission to invoke the Lambda function). An example would be

To run this script as a response to a webhook, set up a webhook endpoint, which runs this code, and then, if necessary, returns a successful response if the Lambda has run successfully.